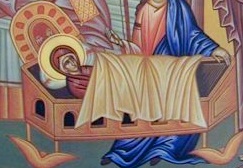 Nativity of the Virgin Mary the Theotokos
Nativity Story

Mary was born nine months later. After birth Anna exclaimed, “My soul has been magnified this day.” Then after her forty days of purification Anna was purified and called her new child Mary (Miriam in Hebrew and Mariam in Greek) in agreement with the instructions of the Archangel Gabriel.

It is not clear where the actual birth took place. Some accounts speak of Nazareth and others say it was in a house near the Sheep Gate in Jerusalem. This latter location is used by Saint Sophromios and Saint John of Damascus. Saint John says, “The Mother of God was born to us in the holy Sheep Gate. Rejoice, O Sheep Gate, the most holy temple of God’s Mother. Rejoice, O Sheep Gate the wall of Joachim’s sheep. It is possible that a man as wealthy as Joachim was had two residences in both judea and Galilee.*

The names are significant. Joachim means “the Lord’s restoration” or “may the Lord raise up.” Anna means “grace,” These are both indicative of their character. The name Miriam has been translated as “lordless”, “Hope”, “Myrrh of the Seas”, “Star of the Seas”, “Illuminated”, “Beloved one”, “Lady”, “Lady of the sea”, “Drop of the Sea”, “Exalted”, Highness”, “Excellency”, “One who surpasses” or “One who dominates.”

* It is said that, as early as in the fifth century the empress Eudoxia built a church over the place where Mary was born, and where her parents lived in their old age. The present Church of St. Anna stands at a distance of only about 100 Feet from the pool Probatica. In 1889, 18 March, was discovered the crypt which encloses the supposed burying-place of St. Anna. Probably this place was originally a garden in which both Joachim and Anna were laid to rest. At their time it was still outside of the city walls, about 400 feet north of the Temple. Another crypt near St. Anna's tomb is the supposed birthplace of the Blessed Virgin; hence it is that in early times the church was called St. Mary of the Nativity.