The Hellenic Foundation of the Church

What role did the Greeks play in the establishment of Christianity?

At the time of Jesus, Greek was the preferred language of the civilized world. It was the common language of trade and intellectual writings.

It was in the 8th century BC that the influence of Greece began to be felt throughout the Mediterranean. This is when the Greek alphabet was created. They began to expand and to establish colonies. The Aegean coast of Asia Minor was first colonized. This was followed by Cyprus and the coasts of Thrace, the Sea of Marmara and the south coast of the Black Sea. Then they extended West to the west coasts of Illyria, Sicily and southern Italy. By the 6th century BC the Greeks had spread over a large geographical area. They organized themselves into independent communities. They thrived in commerce. It reached an economic hight in the 4th century BC where Ancient Greece was clearly the most advanced economy in the world. 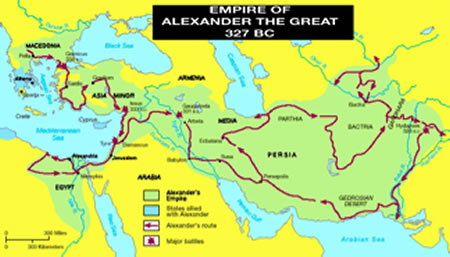 The Most significant spread into the world where Christianity was to be born was the result of the conquests of Alexander the Great. In 334 BC he conquered all of Persia and went as far as what is now Afghanistan and Pakistan and on to Punjab. He died in 323 BC. His empire broke up soon after his death, but his conquests permanently changed the Greek world. There were thousands of Greeks who traveled with him or followed his conquests to settle in new Greek cities that he founded. One of the most important was Alexandria. Greek speaking kingdoms in Egypt, Syria, Persia and Bactria were established. This was the beginning of what is known by historians as the Hellenic age.

One of the features of the Greek society was the differing roles of men and women and the lack of distinction based on birth. The way of life of the Athenians was spread.

The Greek language was the official language in trade, administration and literature.

Where did Paul Journey?

Paul’s first Journey was to Antioch, which was established after the conquest of Alexander the Great as a Greek city. This is where the followers of Christ were first called Christians. Paul went on to Cyprus which is still a Greek speaking nation, and then into what is now Turkey. His second journey Paul visited Antioch and then headed up through the middle of Asia Minor and then into Macedonia, which is now part of Modern Greece. He visited Neapolis, Phillipi, Thessalonica, Berea, Athens and Corinth. From there he went back to Aisa Minor to the city of Ehpesus and then back to Israel and Caesarea. His third journey started in Antioch and then through Asia Minor to Ephesus, over to Greece and Thessalonica then to Corinth and back to Thessalonica , Phillipi and back along the coast of Asia Minor. Returning to Caesarea. Finally Paul went to Rome.

The Roman world was one that was heavily influenced by the Hellenic culture and language.

Saint Andrew is the first called of the Apostles. He is also the Apostle that we trace our Apostolic tradition back to. He is also the brother of Peter. Historian Eusebius tells us that Andrew preached in Asia Minor and along the Black Sea as far as Volga and Kiev. He is, therefore, also the patron saint of Romania and Russia. In 38 AD he founded the See at Byzantium, which later became the Patriarchate of Constantinople. He traveled through Greece and was martyred in Patras.

Today, our Ecumenical Patriarch is Bartholomew. He is the 270th Patriarch . Our Bishop Metropolitan Alexios in Atlanta can trace his ordination directly back to Saint Andrew.

The role of apostolic succession in preserving true doctrine is illustrated in the Bible. To make sure that the apostles’ teachings would be passed down after the deaths of the apostles, Paul told Timothy, "What you have heard from me before many witnesses entrust to faithful men who will be able to teach others also" (2 Tim. 2:2). In this passage he refers to the first three generations of apostolic succession - his own generation, Timothy’s generation, and the generation Timothy will teach.

In the Epistle of St. Clement to the Church at Corinth, written around 96 AD, Clement defends the authority and prerogatives of a group of "elders" or "bishops" in the Corinthian Church which had, apparently, been deposed and replaced by the congregation on its own initiative. In this context, Clement explicitly states that the apostles both appointed bishops as successors and had directed that these bishops should in turn appoint their own successors; given this, such leaders of the Church were not to be removed without cause and not in this way.