Dormition of the Virgin Mary the Theotokos
Preparation 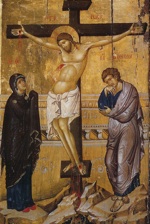 At the time of Christ’s crucifixion Mary was about 48. She stood at the cross blessing Him and weeping silently. She was the first to see Him when He arose from the dead. She was there when He ascended into heaven. She was with them when he sent the Holy Spirit to empower them at the day of Pentecost. After the Ascension of the Lord, the Mother of God remained in the care of the Apostle John the Theologian, and during his journeys she lived at the home of his parents, near the Mount of Olives. She was a source of consolation and edification both for the Apostles and for all the believers.

During the persecution initiated by King Herod against the young Church of Christ (Acts 12:1-3), the Most Holy Virgin and the Apostle John the Theologian withdrew to Ephesus in the year 43. The preaching of the Gospel there had fallen by lot to the Apostle John the Theologian. The Mother of God was on Cyprus with St Lazarus the Four-Days-Dead, where he was bishop. She was also on Holy Mount Athos. St Stephen of the Holy Mountain says that the Mother of God prophetically spoke of it: "Let this place be my lot, given to me by my Son and my God. I will be the Patroness of this place and intercede with God for it." 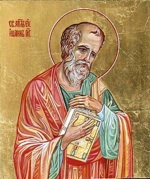 When she had reached an advanced age, about 70 years of age she was living at the house of John in Jerusalem. Day and night She spent her time in prayer. The Most Holy Theotokos went often to the Holy Sepulcher of the Lord, and here she offered up fervent prayer. More than once, enemies of the Savior sought to hinder Her from visiting her holy place, and they asked the High Priest for a guard to watch over the Grave of the Lord. The Holy Virgin continued to pray right in front of them, yet unseen by anyone. In one such visit to Golgotha, the Archangel Gabriel appeared to her and told her. “thus saith thy Son: ‘The days are approaching when I will take My Mother unto Me.”… He is with thee. Therefore do not be troubled over these words. but receive it with delight, for thou shalt be translated to life eternal.” As a

sign he gave her a date palm branch from paradise so bodily death would not have power over her. He told her that this branch was to be carried before her bier. She prayed saying: I would not have been worthy to receive Thee, O Lord, into my womb, unless Thou Thyself had mercy on me, Thy slave. I kept the treasure entrusted to me and, therefore, I have the boldness to ask Thee, O King of glory, to protect me from the power of Gehenna, If heaven and the angels tremble before Thee, how much more man, made of dust, who has nothing good of his own except what he has been given by thy goodness, Thou O Lord art God, blessed forever.” She then prepared for her repose and told about this to Saint John. She then told the rest of her household about her pending repose including Mary Magdalene, Sepphora, Abigail, and Jael who lived with her. 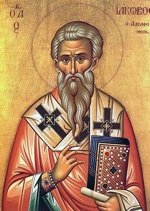 Saint John sent for the Lord’s brother James, the first Bishop of Jerusalem to inform him. A great multitude then gathered around her. She showed all who gathered the palm branch from Paradise and asked them not to weep for her. She asked them to rejoice instead. She told them she would be able to pray to her Son with greater boldness after her repose as she would be standing near the throne and able to converse with Him. She assured them she would visit the whole world and attend to its needs and help those in trouble. She made it known that she should be buried on the Mount of Olives which was not far fro Jerusalem, in the Garden of Gethsemane. This is where her parents Joachim and Anna were interned as well as her spouse Joseph.

While the Theotokos was making all the necessary arrangements the Apostles were miraculously brought together in Jerusalem. Peter came from Rome, Mark from Alexander, Matthew was on a boat. Paul arrived along with St. Dionysios the Areogapite, St Hierotheos, Apostle Timothy and the rest of the seventy Apostles.

She told them in their grief. “Do not sorrow, my children, for you make me sad when I see you cry so. Although I will be going to my Son, O friends of my Son, I will not be apart from you, nor from them that call upon me. Nay, I shall be an intercessor and mediatress for all the Christians before my beloved Son. Therefore do not weep friends and disciples of my Son and God. Do not darken my joy by your sorrow and mourning. Rather, rejoice with me, for I am going away to my Son and God. My body, which I have myself prepared for burial, commit to the earth in Gethsemane, Afterwards return again to the preaching of the Gospel appointed to you.