Annunciation Of Virgin Mary the Theotokos
Lifestyle of Mary 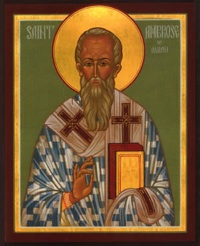 According to Saint Ambrose (4th century) Mary “was a virgin not only in body but also in mind… She was always humble in heart, grave in speech, prudent in mind, sparing of words, studious in reading, resting her hope not on uncertain riches, but on requests of the poor, intent on work, and modest in discourse. She sought God as the judge of her thoughts and not men. She never sought to injure anyone but to have goodwill towards all. She never thought to rise up before her elders nor to envy her equals. She avoided boasting, loved virtue and to follow reason. Never a word passed her lips that was not with grace. She never disagreed with her neighbors nor despised the lowly. She never avoided those in need and never despised anyone though they were poor. She never laughed at anyone but covered all that she saw with her love.

“There was nothing gloomy in her eyes, nothing forward in her words and nothing unseemly in her acts. She never made silly movements, not took unrestrained steps. Her voice was never petulant. Simply put, her very outward appearance was a reflection of her inner perfection, goodness and meekness.

“Who can describe the sparseness of her diet and the abundant services–the one insufficient for nature, the other abounding beyond nature? There were no seasons of slackness, but days of fasting, one after the other. If the desire for refreshment came upon her, she took what food was generally at hand, but never to cater to comfort, just so as not to destroy her life. Only necessity caused her to sleep, and yet while her body was resting her soul was awake. Often in sleep, she would go through what she had been reading, for she read sacred Scripture almost unceasingly, or she went on with what sleep had previously interrupted, or she would carry out what she purposed or foresaw what was to be carried out.

“She was unaccustomed to go out of the house, except for divine services, and this was always in the company of kinsfolk. She was always busy at home. Though the Virgin had other persons who were protectors of her body, yet she alone guarded her character. She inspired respect by her gait and address, not so much the progress of her feet as by step upon step of virtue. She possessed all the virtues, for whatever she did is a lesson in itself. Mary attended to everything as though she were warned by many, and fulfilled every obligation of virtue as though she were teaching rather than learning.

“Indeed, when the Archangel Gabriel enters, she was found at home in privacy, without a companion. She desired no one to interrupt her attention or disturb her. She did not desire any women companions, for she had as her companions good thoughts. Moreover, she seemed to herself to be less alone when she was alone. For how could she be alone, who had with her so many writings, so many archangels, so many prophets?”*

Many other Church Fathers attested to her virtuous lifestyle.