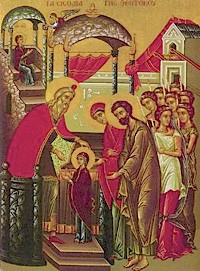 The Orthodox teaching on the The Entry of the Theotokos into the Temple as the heralding of the salvation of mankind is seen in the Icon of the Feast.

The central theme of the icon is the Holy of Holies in the Temple which is about to receive a blessing far superior to any of its former blessings.

The priest Zacharias, the father of St. John the Baptist, receives Panagia with outstretched hands at the gates of the Temple and in this way prophesies that the Virgin Mary is the New Ark of the Covenant.

Mary is shown as a small child, standing before Zacharias with her arms reaching up to him

In the upper center portion of the icon, the Virgin is seated on the steps of the Holy of Holies. An angel is there, attending to the one chosen by God to bring the Savior into the world.

Notice that the young virgins do not have their heads covered but that the Theotokos has her head covered.  Also the garments of the Mother of God resemble those of Saint Anna and not of the young virgins.  The Theotokos, although a child, is already a perfected woman that has reached full spiritual maturity.  She who in body is but three years old, and yet in the spirit is full of years (Ode three of the Second Canon).