Entry of Virgin Mary into the Temple
Selecting a Husband, Joseph, for Mary the Theotokos

That fall at the feast time when many important persons would be in Jerusalem, the priests decided to seek their advice about how to deal with this difficult situation they faced dealing with Mary.

They met in council and discussed the matter. They said to Zacharias, “Do you not stand before the altar of the Lord and enter into the holy place? Petition the Lord concerning her and whatsoever the Lord makes manifest to you, that you must perform.”

This he did. While they all prayed he entered the holy place wearing the vestment called the breastplate of judgment and petitioned God about how to deal with Mary. An angel came to Zacharias and said, “Zacharias, Zacharias, go forth and call together all the widowers among the people and have each man bring his rod or staff. And the one to whom the Lord shall show a sign, shall be the husband of Mary.” The matter concerning to whom the virgin should be given and be betrothed would be resolved in accordance with the prophecy of Isaiah, where he says, ‘there shall come forth a rod out of the root of Jesse, and a blossom shall come up from his root’ [Is 11:1]. In this way God told Zacharias to betroth the virgin so that the devil might overlook her as the possible virgin of Isaiah’s prophecy.

One of the priests by name Abiathar stood us and said, “Hear me, O sons of Israel, and receive my words into your ears. Since the time when this temple was built by Solomon, there have been in it virgins, the daughters of kings and the daughters of prophets, and of high priests and priests. They were great and worthy of admiration. But when the maidens came to the proper age they were given in marriage and followed the path of their mothers; and they were pleasing to God. However, Mary has found a new order of life, for she has vowed to remain a virgin to God. Wherefore, it seems to me, that by the answer we received as a result of our inquiry, we should try and ascertain to whom Mary should be entrusted.” 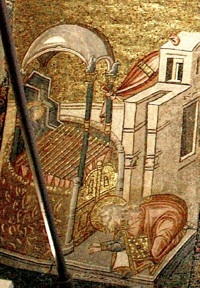 The others approved of what he said. A lot was cast by the priests on the twelve tribes and it fell to the tribe of Judah. Then all the eligible widowers of Judah were summoned. They called out, “Let every man who has no wife come and bring his rod in hand.”

At that time there was a widower named Joseph who was about eighty years of age. He was of the tribe of Judah and the royal house of David. He had been married for forty years and was a widower of about one year. He was a carpenter by trade and lived honorably. His first wife Salome had borne seven children: James, Jude, Simon and Joses; and three daughters: Salome (future mother of Apostles James and John the Theologian), Esther and a third girl. Joseph came with other widowers and handed his rod over to the high priest. The angel told the priest to place the rods in the Holy of Holies where they were to remain until the following day. The sign that was to be shown was that out of whoever’s rod a flower budded forth was the one to whom the virgin was to be betrothed.

The next day all the widowers assembled and the high priest went into the altar to retrieve the rods. After they had been distributed no sign appeared. The priest then put on the sacerdotal robe and the twelve bells and entered the Holy of Holies offering a sacrifice. As he entered an angel pointed out to him that there was the shortest rod which had not been taken out with the others. The angel told him to take it and the sign will appear. The rod was that of Joseph. Joseph since we was very old had not requested his rod back feeling he was too old for this task anyway. The priest called to him, “Joseph, come and receive the rod; for we are waiting for thee.” Joseph was trembling as he came forward. As soon as he touched the rod a flower budded and flowered from its top.

All those gathered congratulated Joseph for the blessing he had received in his old age. The priests said to him, “ Take her, because of all the tribe of Judah you alone have been chosen by God. Take the virgin of the Lord and keep her for Him.” Joseph resisting this responsibility replied that he was a very old man with children and grandchildren and wondered why they would hand to him this young child.

The priest Abiathar said, “Remember Joseph, Dathan, Abiram and Korah perished when the earth opened and swallowed them up, because they contradicted and despised the will of God [Num 16:25-33]. So it will happen to you and your family if you choose to despise what is commanded of you by God.” Joseph did not want to despise the will of God. He agreed to be her guardian until God determines to which of his sons can have her as a wife. But the priest Abiatha then said, “Five virgins shall be given to her for consolation, until the appointed day shall come when you may receive her, for she shall marry no other man.”